Today we’ve released the second last minor release of version 5 of Time Clock MTS (version 6 is under development right now). Here’s a summary of the changes made to this release:

A release today that addresses a problem that’s been hanging about for a while that we’ve struggled to get to the bottom of. There’s a couple of other little tweaks and some enhancements to make some processes easier.

The path to captured web-camera images can now be set on the administrator computer whether there’s a camera plugged into it or not.

Version 5.1.3 of Time Clock MTS has been released. There’s five fixes included in this release, here’s the details of those fixes:

Version 5.1.2 of Time Clock MTS has been released. This released addresses four issues that have been raised recently with us by users.

I’ll be uploading version 5.1.1 of the software shortly. This blog explains the changes made in this new release in a more detailed fashion than what you can see over on the release notes page. 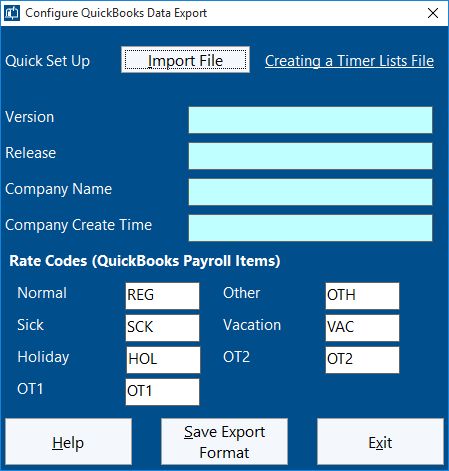 Time Clock MTS can now create IIF (Intuit Interchange Format) files suitable for importing into QuickBooks. I’ll be writing a detailed how-to article explaining how this is done but the initial set up is done on the Configure QuickBooks Export screen which you can see above. This screen allows you to import a QuickBooks Timer Lists file to quickly configure the export format and also to map rate codes to QuickBooks payroll items.

A lot of time has been spent working on the job tracking screen to make it easier to use, especially when the job list is long. Checkboxes have been added to the list to allow you to bulk delete or deactivate jobs. New links have been added below the toolbar to allow bulk changes to be made to the checkboxes next to the jobs in the list. You’ll note that the Delete Jobs button has been changed to allow deletion of the selected job or all checked jobs. Also, a Deactivate Job button has been added that similarly allows deactivation of the selected or checked jobs. 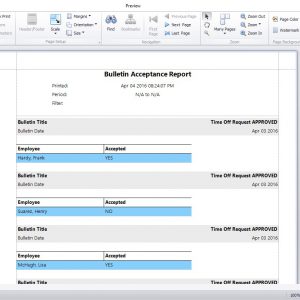 Seen above is the Bulletin Acceptance Report. A new button has been added to the Employee Bulletin Board Screen that generates the report. The report itself shows which employees have or have not acknowledged their acceptance of bulletins that have been shown to them as they clock in or out. Obviously the bulletin needs to have the Requires Acceptance flag set for employees to be able to acknowledge their acceptance of it. 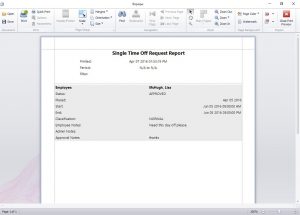 The Single Time Off Request Report

A new button has been added to the Display Settings Screen called Kiosk Mode. When using the employee list interface this setting will maximize the time clock window to take up all available screen space, it will disable the close window and re-size window buttons, it will prevent the window from being re-sized and it will prevent the window from being moved. It also disabled the Help menu (to stop users starting up a web-browser. It does something similar with the keypad interface window but it does not maximize the window size, so right now the kiosk setting is really only useful if you’re using the Employee List Interface. This setting ONLY takes effect if the administrator is not logged in. When the administrator is logged in you’ll be able to move and re-size the program window as normal.

As you can see there’s a lot of things changed in this release.  As always, if you have any issues please contact us.  I’d like to thank the users of the software who suggested some of the changes you see in this release and also to the user who helped us track down the bug with accrual times.