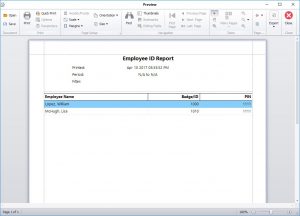 Version 6.0.12 of Time Clock MTS is now available for download. It addresses what we hope is the last of the issues we’ve had with the camera system. Sadly, even though we tested the system out on a great number of different USB cameras and laptops with integrated cameras we still had users experiencing issues with their own setups and we’ve fixed these problems up as we’ve found them. For the technically inclined the latest fix is for Windows 10 machines with integrated cameras. On some W10 machines the integrated camera is disconnected from the internal USB hub from time to time, presumably due to some power saving scheme. That’s fine though because Windows fires a USB disconnected message, however, when it reconnects the camera it never fires the reconnected message and the Time Clock MTS camera system didn’t know the integrated camera was available again. We’ve managed to work around this though, no thanks to Windows not doing things the way it should.

Anyway, I digress. Here’s the list of changes made to this version:

Version 6.0.11 of Time Clock MTS has just been made available for download. Here are a list of the changes made:

Version 6.0.10 of the software was released today. Changes made all focus on improvements and fixes to the new employee camera system that was introduced recently. Here’s a list of the changes made:

Time Clock MTS Version 6.0.9 has been released. There’s a couple of months of work in this new release with most of our effort targeted at two main areas. First, the complete replacement of the camera system used previously with what should be a far more reliable and better supported system. The second area of focus was the elimination of delays when employees punched in or out. These delays were only seen on some computers primarily running Windows 10. We’re pretty sure we’ve identified where and how the delays were occurring and have fixed them up.

A complete list of the changes can be found below:

Time Clock MTS Version 6.0.8 has been released. Details of the changes made in this version can be found below.