For existing users of earlier versions of Time Clock MTS who are thinking about upgrading you should be aware that Version 5 makes changes to the time clock database that render it incompatible with earlier versions. So make sure you back up your data BEFORE upgrading. Read More Here.

No doubt I’ll be writing a series of entries about the release of Version 5 but I thought it well worth the effort of summarizing the major changes in this blog entry.

One of the major new features that is will be included in Time Clock MTS Version 5 (due to for release in January 2014) is email alerts. Email alerts can be configured by the time clock administrator and will automatically send emails to recipients of your choosing based on certain events happening in your employee time clock. Email recipients are configured on the manage time clock emails screen I spoke about a few days ago. Email alerts are set up on the new Email Alerts screen (see below) which will be available from the Tools->Email Alerts menu from within the Time Clock MTS Administrator software. 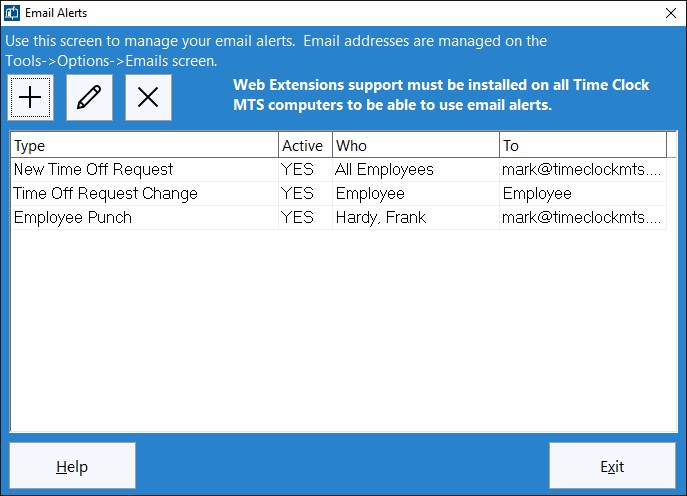 This screen is used by the administrator to manage email alerts.

The Email Alerts screen looks like many other screens in the software. A new alert is added using the New Alert button, existing alerts are edited by double clicking on them in the list or by selecting an alert and clicking the Edit Alert button. Deleting alerts is simply a matter of selecting an alert on the list and clicking the Delete Alert button. The initial release will include three different types of email alerts. The first is a raised when an employee creates a new time off request, the second is raised when the status of a time off request is changed by the time clock administrator, and the final type can be raised when an employee punches in or out (or both). I’ll preview the detailed features of each of these types of alerts in another blog entry in the next week.

As we get feedback from Time Clock MTS users after Version 5 is released we’ll be including more types of email alerts as time goes by. 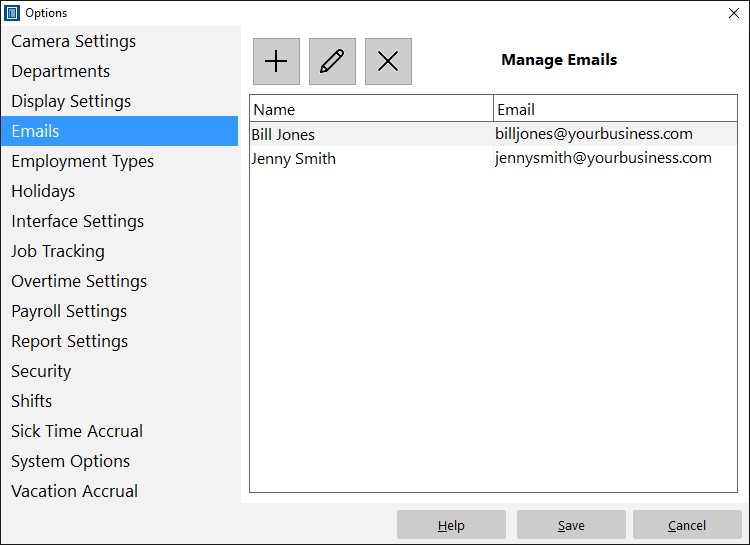 Above you can see what the Manage Emails screen is going to look like in Time Clock MTS Version 5 (due for release in January 2014). This screen will be available from the Tools->Options menu in the Time Clock MTS Administrator software.and is used to add, edit, and delete emails from the master email list. In the initial release of the new version emails will be used to send email alerts. In the future time clock emails will also be used to allow direct emailing of PDF versions of reports from the reporting screen.

It is suggested that you create emails for the time clock administrator, department supervisors, payroll supervisor, and any other employee supervisor. Of course each of these people will need to actually have an email account they can check. It doesn’t matter if this is their work email or a web based email system like GMail.

What is the Employee Time Off Request Report? 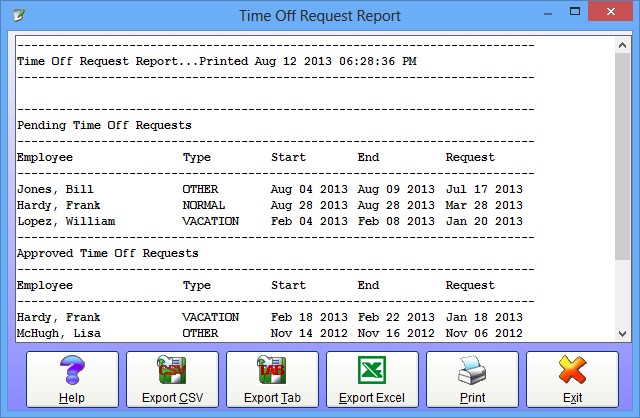 The Time Off Request Report

The employee time off request report allows users to break down requests by status and date. The way the report is generated is different to most other reports in Time Clock MTS because it is not configured from the report configuration screen but rather is run directly from the screen administrators use to manage employee time off requests. Here’s an image of that screen: 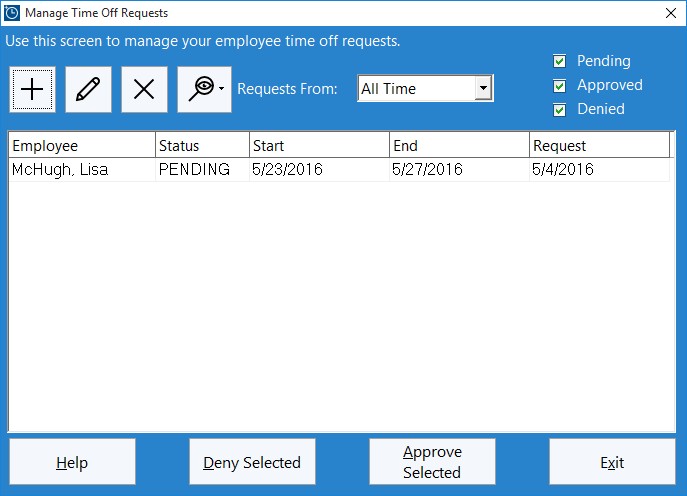 The report is run by clicking the button with the printer icon on it. The actual data displayed on the report is determined by what data is displayed on the screen at the time. So, if for example, you’re showing requests from All Time (selected from the time period drop down) and only displaying Pending requests (because the Pending checkbox is ticked and the other two boxes are not) then the report will show Pending requests regardless of the date the requests were made.

Another example would be to display all Approved requests from the the previous month. To accomplish this we would select “Last Month” from the time period drop down and check the “Approved” checkbox and uncheck the others. To view the report click the Printer button.

In conclusion if you do need to record and track employee time off requests from your employee punch clock software then the time off request report is an ideal way of reporting on those requests. Don’t forget that there’s also dozens of other time clock reports available from within Time Clock MTS and one of those is bound to fit your requirements. 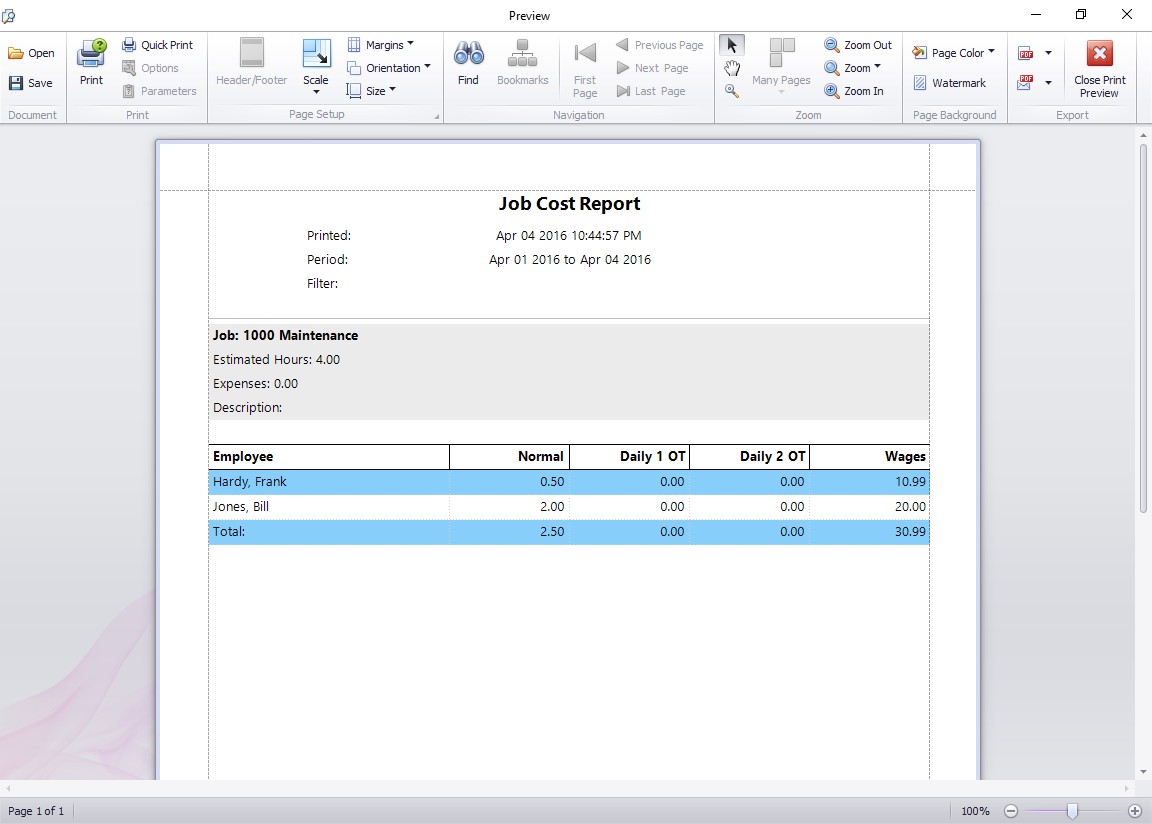 This report breaks down job costs by employee and by hourly rate.

Above you can see an interesting report that was added to the latest version of our Job Tracking Time Clock. The Job Cost Report breaks down the total wages cost for a single job or all jobs across a date range. If you’re running the report for all jobs then time spent working on NO job is also included in the report. The salary costs are split by each employee who has worked on the job during the report date range, and furthermore, their hours are categorized by hour type. This means you can see how many normal rate hours, overtime rate 1 hours, and overtime rate 2 hours have been spent by each employee on a job.

Regardless of what overtime scheme you’re using the Job Costing Report will report the hours worked by each employee against a job and break this down by pay rate.

How to – The Reports User

This Time Clock MTS How To Article covers how the Reports User is setup and how you’d go about logging in as that user. 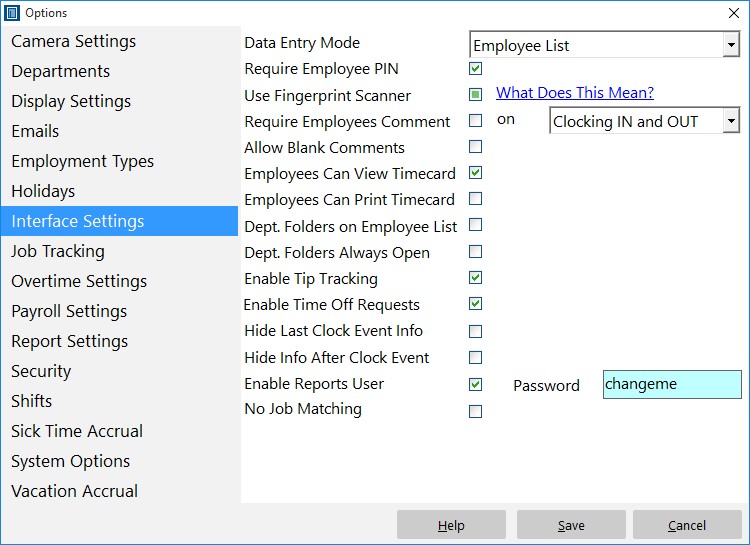 Use this screen to control how employees punch in and out and how Time Clock MTS looks.

This screen is used by report users to login with their password.

The Report User can access all reporting functions via the Reporting menu. This includes all of the payroll reports that can be accessed from the Payroll Reports. Don’t forget that the Reports User needs to log out of Time Clock MTS using the File->Log Off Reports User Account.