END_OF_DOCUMENT_TOKEN_TO_BE_REPLACED

From an administrative standpoint, it is easy to identify trends, particularly in overtime and tardiness of our employees.

Above is a statement from Kristina Harford who is the operations manager at Infectious Disease Associates of Tampa Bay. She’s talking about Time Clock MTS, which her company has been using as an employee time management system for several years. There’s no doubt that controlling tardiness of employees is a key role of any department supervisor or payroll department and a good staff clock in system should allow those same things to be recorded and monitored easily.

What is Tardiness and is it a Problem?

Tardiness is the delay between an employee starting work and when they should have started work. It’s also lateness during the work day, such as being late back from lunch, arriving at meetings late, and being late to customer appointments. In this article I’ll just be considering tardiness as “being late to work”. Is tardiness a problem? The answer is yes. In 2011 Careerbuilder suggested that tardiness was an important issue in the US labor market with 16% of employees late to work at least once per week and more than a quarter of employees late to work at least once a month. HR Magazine stated in 2005 that tardiness was costing the US economy more than $3 billion a year.

“Time is money and when it comes to making business journeys, punctuality and speed are crucial.”

So What Does Tardiness Actually Cost?

It’s easy to assume that tardiness cost is calculated by multiplying the employee’s hourly rate by the amount that they are late. But, some human resources experts suggest that the real monetary cost of an employee being late is 2-3 times their hourly rate. This approach considers the cost of the employee’s time, the cost of the office/factory/store space that is going unused while the employee is not working and the cost of employee overheads and benefits, I’ll take this one step further and suggest that the opportunity cost of foregone profit should also be considered when an employee is continually late.

So how much does an employee being late to work actually cost? In the interests of being conservative I’ll just go ahead an assume that the real cost of tardiness is the hourly rate of the employee multiplied by the time the employee is late. Given that the median wage in the US is about $13 per hour an employee that is 15 minutes late once a week is costing you $169 per year. A great example in non monetary terms is that if an employee is late to work just 10 minutes each day then you, are in effect, giving them an extra week of paid vacation each year. Whatever way you look at it, late employees cost money and it cannot be ignored.

There’s a financial aspect to employee tardiness that cannot be ignored. But there are other, less easy to measure costs that tardiness has on the business. What these costs are is worthy of an article by itself but here’s a few impacts of late employees that you might not have considered:

It’s imperative to identify lateness trends early. An employee who suddenly starts being tardy to work can be an employee who is suddenly suffering family or personal stress. Early identification can mean a quick discussion with the employee and either a solution to the lateness being found or the employer being flexible for an amount of time while the employee resolves their personal issues. Identification of a long term habit of lateness can point to underlying causal problems for an employee, perhaps transport problems, perhaps simple problems with time management, or perhaps dissatisfaction with their job. Whatever the case identifying the trend and then addressing the issue with the employee can potentially be far more effective than trying to enforce a no-questions-asked start time for work policy. 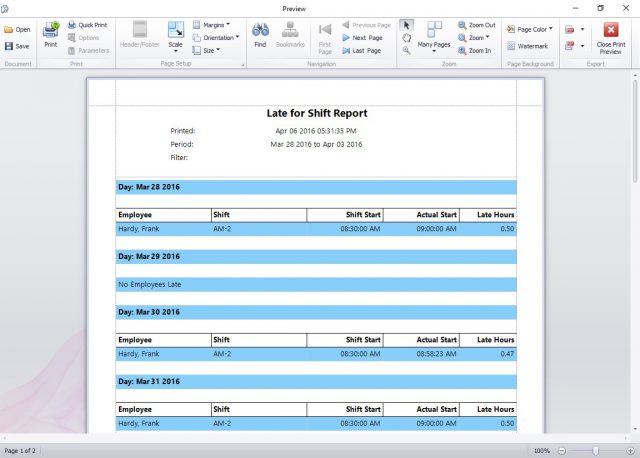 The late for shift report displays all employees that have arrived for work after their designated shift start times.

A great employee time management system like Time Clock MTS will help you monitor employee tardiness as a normal part of your payroll duties. The system will allow your employees to clock in and out with a minimum of fuss and it should then produce easy to understand reports showing exactly when your employees arrived at work. Ideally there’d be some dedicated reports designed specifically to help identify employees who are late for work (such as the late for shift report in Time Clock MTS, see image above). The timeclock software should also provide a quick visual method of identifying who is or isn’t at work at any point in time.

END_OF_DOCUMENT_TOKEN_TO_BE_REPLACED

It’s also nice to come in and check on who is here and check if they were on time or late for their shifts by checking the red and green lights. It’s a no hassle system and very simple to use and the students love it too!

Above you can see what Angie Andrade-Morioka, the directory of staffing and facilities at the University of Hawaii at Hilo had to say about how they are using Time Clock MTS to track tardiness. Remember, an employee who is late to work just once per week can be costing you up to $200 per year. Time Clock MTS has a fully functional 30 day trial available and costs just $99 (US) for the Stand Alone Version. If it can help you prevent just one employee tardy per week then it’ll pay for itself 2-3 times over in just a year. Why not give it a try!